When you tell someone you’ve got chickens or even that you’re thinking of getting some then I can guarantee that one of the first questions they ask will be “what about foxes?”. Yes it’s a valid point as one of your main priorities of owning chickens is to give them a safe environment to live in and keep them safe from predators. This applies to those in coops as well as those that free range.

People are right to label foxes the number one threat as they will quite happily wipe out your entire flock and they’re very good at it too. They will often stalk out your coop, maybe even for weeks, before making their move, and once they’re in they will clean out your coop and usually kill all the chickens even if they don’t intend on eating them all.

Foxes will usually get into a run by jumping over, or digging under a fence, and will go into a frenzy ripping the heads off the chickens. I know that sounds grim but it happens and many owners who have suffered fox attacks will sometimes give up owning chickens altogether after witnessing the aftermath of that. This is why its so important to build your coop and run well as a fox is more like a cat than a dog and can squeeze through small gaps as well as being able to tear through chicken wire. This video below shows you just how easy this can happen: 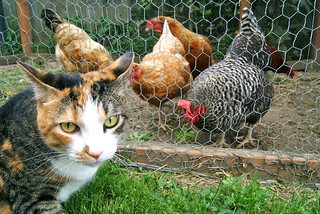 My cat and chickens live quite well together and both know their place and generally keep out of each other’s way but the fact is that cats will always have a wild side to them and cannot rid themselves of their inner predator. I will sometimes see the cat crouched down low, ready to pounce, and know what she’s thinking. It won’t lead to anything other than spooking the chickens as the cat knows she couldn’t take down my big hybrids, but it still reminds me of the potential. If you have chicks or small bantams then you should be more wary though.

When it comes to neighbours cats I’m not sure I could trust them so I do keep an eye out if the chickens are free ranging in the garden but luckily we don’t get many cats venturing in as our moggie see’s them quickly off her patch so it’s a two-sided coin of owning a cat and I’d say it sways in your favour to have one.

Dogs can be excitable things and you can’t always know how they’re going to react so I’d recommend that you keep them separated. Some dogs can be pretty calm but can’t resist having a chase of the birds and probably just want to play. They don’t want to hurt them and definitely won’t eat them as once the chicken stops moving then the fun is over.

On a side note, even if the dog doesn’t kill a chicken it will definitely give them a fright and that could effect their egg production.

It’s important to not only keep your coop and run clean but also keep your food and bedding stores secure too as rats and mice will spread disease, eat your feed and worst case will steal eggs and even gnaw at chicken’s feet. If you find evidence of vermin then remove food and water at night and place traps around the garden.

The fact is that’s it’s impossible to keep them safe all the time so you must ready yourself for the fact that something could happen and all you can do is minimise the risk and not remove it entirely. I want happy chickens who can roam around but making sure pens and coops are secure and locking away your chickens at night are just part of a schedule to keeping them safe.

You can further eliminate risks with tall fences, electric fencing, etc but must weigh up cost versus risk.